Faye Young Wants to Jib With You Last month,  Julia Baumgartner (along with the help of Mary Luggen) hosted a girls-only jib contest at a snowboard park in Innsbruck. The weather forecast looked great, so me and my friend Polly made a short car ride from Mayrhofen to join in. Over 30 girls made the effort to come together for a really fun day of shredding. Patscherkofel was easy to get to, being just ten minutes drive from Innsbruck and you can even catch a gondola from the city center to get there. It is a small and quiet resort, so apart from a few local lads the girls had the park to themselves. 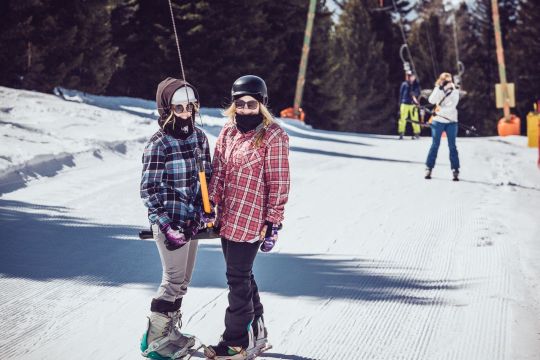 The Patscherkofel park is a really fun jib park with lots of nice features. There are sections of open piste between the parks, so you can do some side hits and butter around in between hitting the rail lines. The park is nicely colour-coded based on difficulty, so there is something for everyone. You can stick to the features within your ability or take it up a notch and try something new. That was the great thing about this contest- you really felt like you could try new things and if you did land something cool everyone was cheering and supporting each other. The competition was a jam format, so no pressure and lots of laps to land tricks. After a morning of practice the jam took place on a section of the park that had a t-bar alongside it so we could get plenty of laps in. The atmosphere throughout the day was amazing, I’ve never been to a contest that felt this relaxed! The highlight of my day was when every single girl did a full park lap together, it was like being on our own girls-only mountain! After an hour-long session, all grabbed a deck chair and waited for prize giving. Austrian sisters Katha & Sandra took the top spots after throwing down some really stylish tricks, Katha easily claimed trick of the day with a back board through a triple kink rail! Her sister Sandra also did a steezy nosepress 180 out on the same rail. All of the girls rode really well and everyone left with a nice goody bag and a smile on their face! Hopefully next year will be an even bigger turn out and we can get more girls involved with this girls only rail jam!