Halina Boyd Takes You Through Japan

I was on a pillow hunt. My crew of 3 snowboarder chicks, 1 skier chick and one filmer dude had been in Hakuba, Japan for 4 days now and it was dumping- snowing about 5cm/hour. I began to pick up that we were going to need some vert in order to get any momentum through the new Japow. That morning we had sessioned the Happo-One Banks Park opening. It was so groovy; huge banked turns, hips and method mania! The Japanese have the most uniquely-shaped boards I’d ever seen. Swallow tails, blunted tips and styled-out surfer turns ruled the scene.

After our tasty lunch of noodles prepared five different ways, we headed out with our guide Yusaku to see if we could find some side-country zones to session this incredibly fluffy maritime powder. Our wandering brought us up to an abandoned cat track. It made for a safe zone to scope the snow pack and wade through hip deep, actually stomach deep in some places, powder. When one ski cut triggered a remote 12-inch storm slab and multiple people heard “whomping” on the ridge line, we knew it was time to get out of there and back to the resort. As we jibbed our way down Happo-One, I caught a glance of some huge loaded avalanche barriers and realized that might just be what we need to get some air! I asked Yusaku if we could ride those and he replied with a half-confident, “Yea I think OK, …maybe…” The next morning we scouted out a few avy barriers just outside Happo-One in order to avoid any potential resort “rule bending” and made our way through the gate and down the ridge. After checking them out and verifying we wouldn’t sink up to our necks landing in-between the three tiered suspended netting, we got stoked to take flight and started patting our run-ins down. The afternoon turned into a method, roast beef, chicken salad and back-flip huck buffet. 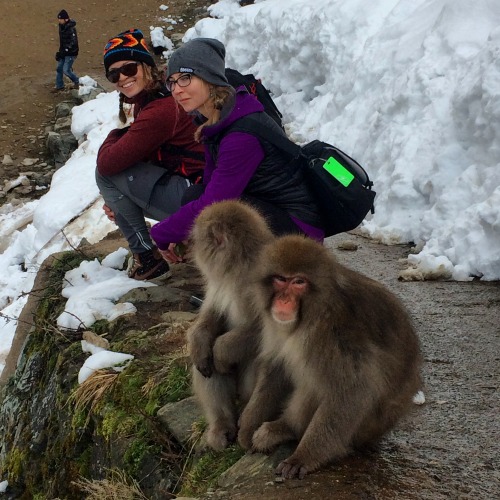 High on stoke and footage for the day, we were on our way down the drainage when one of the ladies noticed a Kamoshika teetering on a smaller avy barrier across the gully, staring at us. These Japanese mountain goats appear to be part wolf, part pig due to their thick grey winter coats and pointy ears. Turns out they’re super curious animals and it had been watching us session the barriers for the better part of the afternoon. “So cool! I love this place! Hi goat!” As we made our way down the drainage towards the neighborhoods, I almost ran over a hippidy-hoppidy white snow hare the size of a two-year-old child and saw one more Kamoshika dart through the trees. The magic of Japan, it’s people, it’s food and it’s mountains has left a void in my heart and stomach that longs to return to the land of the rising sun.